Would you like to get a free sports car?

I don’t need to make any real guesses here. Most (if not all) of us would like to.

However even a free sports car couldn’t get anyone to bid on Chevrolet’s first NFT (Non-Fungible Tokens). This was the interesting piece of news I read a few weeks ago. Chevrolet had created their first ever NFT, an illustration of a bright green 2023 Corvette Z06. The 1 of 1 edition NFT, titled “Own the Color”, also would come with a free real-life version of the car, in the same colour, with the promise that the shade would never be used again on that model of the car. 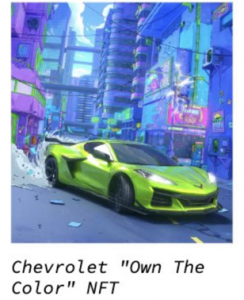 Webster defines NFT “as a unique digital identifier that cannot be copied, substituted or subdivided, that is recorded in a blockchain, and that is used to certify authenticity and ownership of a specific digital asset and specific rights relating to it.” Another Webster definition of NFT is “the asset that is represented by an NFT.” In short, NFTs are certificates of ownership of a unique asset.

NFTs attracted such media attention and noise that it became the Collins Dictionary word of the year in 2021.

Coming back to the Chevrolet news, can you imagine just 1 car of this colour ever?

It’s a great story for selling luxury products and art. Don’t you agree?

According to web3isgoinggreat.com, “the NFT went up for sale on June 20, with bidding scheduled to last for four days, and a starting price of 206 ETH (around $240,000). Apparently, collectors decided the NFT wasn’t enough to justify dropping that kind of cash on a car that is expected to sell for around $90,000, because the auction received no bids.

SuperRare, the marketplace used for the auction, explained that users must have missed the opportunity to bid because of the craziness of NFT NYC (a crypto conference that ran from June 20-23), and thus the project extended the bidding time by 24 hours. After the 24 hours had elapsed, they still had zero bids.”

Remember just last year people buying NFTs were throwing millions of dollars on images of rocks, apes, kitties and many other things.

Look at this Joe Pompliano tweet of September 12th ,2021. 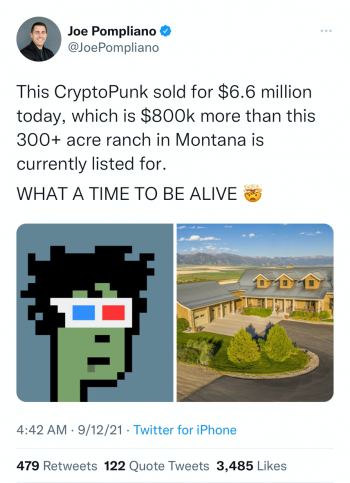 Can you believe that the above CryptoPunk NFT sold for $6.6 million, almost a million more than for a 300+ acre ranch in Montana?

Interestingly a user responds to Joe saying, “Would rather have the JPEG. At least I can show it off to my friends. No one is going to fly to Montana to chill.” I couldn’t figure out whether this person was being sarcastic or real. Another said, “You couldn’t pay me to live in Montana.” Forget Montana, imagine what $5.8 million could have bought you in New York, Boston, LA, San Francisco and Miami but that’s not the point I wish to make either.

They have the same emotions of greed and fear when it comes to investing. The same people who were throwing money at anything couldn’t justify dropping money on a very unique NFT that came with a real world only edition (free) sports car. Suddenly the valuation parameter became the physical car. What about showing off this image, not to mention the physical car? Wouldn’t this have value? This should have solid bragging rights in the physical as well as virtual world.

I understand the power and use cases of NFTs but the price action and speculation that was going on was simply maddening.

So, what was really happening?

A small number of traders and speculators were bidding up prices, leveraging and bidding up prices again. Additionally, many were buying among themselves. According to a newsletter Milk Road, there were only 360,000 wallets that had bought NFTs whereas Coinbase as a platform had 89 million registered crypto buyers. Whether it is 360,000 or 1.5 million, the key point is that very few people were buying/trading NFTs and creating a huge trading volume. They were creating an illusion that the prices of NFTs will keep going up. Many media outlets were happy to promote such stories which in turn seemed to attract the attention of people. As long as prices are going up, all is well, but we all know what happens when the tide goes against you.

We are in the midst of a severe crypto winter (a term for an extremely bearish crypto market). The bidding up of prices mania has died now and thus there are practically no takers even for some unique things.

Another interesting data statistic that I had read (source: Milk Road) much before this harsh crypto winter had even started and NFTs were still going strong.

“There are 6.8 million NFT collections on OpenSea (the biggest marketplace for buying and selling NFTs). Only 15K (0.2%) ever had a sale. This means 99.8% of the NFTs already had no market value.”

So, what was the noise about?  The noise was made up because nothing sells better than the price of an asset that is going up continuously.  Price Action and Making Quick Money attracts more people and more money. The lure of Fast Money is so deep that we will continue to see such manias in some form or the other till our human race exists.

I end this post with a quote from an unknown source – “The difference between stupidity and genius is that genius has its limits.”

The 3 types of Investor Behaviour in the Current Market

“What’s happening in the current environment? The data is not so good, but markets are going up” said Raj, a seasoned senior corporate executive. When the market goes up i ....Read More

The Ingredients of a World Class B-Filter

I got an overwhelming response to my last Nano “The Bullshit Filter” and everyone was curious to know how to identify the believable Bullshit. They felt that unbelievable Bulls ....Read More

The Basic Laws of Human Stupidity

The headline of this post is actually the title of a brilliant 86-page book by Carlo M. Cipolla (1922-2000), an economic historian and a professor at University of California Berke ....Read More

In the book Nudge – The Final Edition, Authors Richard Thaler and Cass Sunstein give a very powerful example when explaining the Availability Bias.***A quick quiz: In the United ....Read More