All the Money in the World

In my venture capital class at Wharton, I met an amazing set of people from all over the world. One of them was Rick (name changed), a hot shot biotech executive. Rick was in his early thirties and was in the process of raising sizeable capital and selling out. During one of our lunches together, we were all talking about the work that we do. When it was my turn, I spoke about Happyness Factory and the philosophy of HappyRich (the purpose of money in your life and how we help families live the life that’s truly important to them).

While many (including some CFOs, Entrepreneurs and Venture Capitalists) just loved the word HappyRich and the philosophy, Rick said, “I just need a billion dollars. I can’t think of anything else.”

Rick didn’t seem to have an answer to that, but I could see he was thinking.

I asked him another simple question – “Let’s assume you have a billion dollars tomorrow, what would you do with it?” I then shut up and let Rick respond.

Everyone was eagerly waiting for an answer. Rick thought and he thought. There was a long silence. He then said, “I don’t know. I never thought it would be such a hard question to answer. I never really thought of it that way. I might buy a nice car, a bigger house, take on a few vacations but beyond that I can’t think of anything.” Someone married with children might have thought of financial security of the family, lifestyle maintenance, and so on, but for most it’s a very difficult question to answer.

I then asked him – “Why do you want to become a billionaire?” He was quick on this one, “I thought it was cool becoming one. There are all these people that you see in Silicon Valley and the lives they live. I thought I needed to get ahead of some of them or at least have as much as them.”

As I had written in my post “Mimetic Theory and Investing“, It is models – not our objective analysis or central nervous system – that shape our desires. Rick’s desire of becoming a billionaire came from the other billionaires (models) he saw. In the world of entrepreneurship, the models of desire are Elon Musk, Jeff Bezos, Steve Jobs and so on.

Then I asked him the final one, “Have you thought how much is enough for you?” 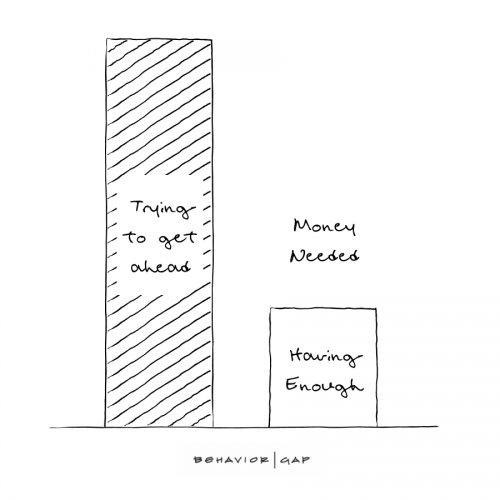 Everyone talks of getting ahead. We have been told to beat benchmarks or beat someone else. Many don’t even get happy when they have enough. Because someone else has more.

The problem with getting ahead or beating someone is that it’s a zero-sum game. There is only one winner. And the best part is that even the winners consider them as losers.

Joshua Becker in his book “Things that Matter” wrote, “perhaps the greatest danger of wealth is nobody appreciates when they achieve it…they continuously desire more. That’s why people in the top 10% of the world still think they don’t have enough.”

Here is an interesting example from Nick Maggiulli’s book ‘Just Keep Buying’ – “Consider a February 2020 interview with ex-Goldman Sachs CEO and current billionaire Lloyd Blankfein. In the interview he claims that, despite his immense wealth, he isn’t rich: Blankfein insists that he is well-to-do, not rich. I don’t feel that way he says. If I bought a Ferrari, I would be worried about it getting scratched, he jokes.

As shocking as this sounds, I get where Blankfein is coming from.

When you regularly hang out with people like Jeff Bezos and look at Ray Dalio and Ken Griffin as your peers, having only $1 billion doesn’t seem like much.”

It’s not just Blankfein who has this problem. Most rich or high net worth people think they are less well off than they actually are.

Joshua adds, “When the world around us constantly screams that we need more money to live the good life, we fall into the temptation of thinking that we don’t have enough, rather than realizing most of us are already wealthy.”

Here is some homework (just using this word as it felt nice ) for you.

Reflect on these questions now:

As always, I would love to hear from you.

“I thought I came to the expert, who can protect my capital and my family.”Who do you think said this?Sorry, wrong question.Attempt another one.What kind of client do you think ....Read More

The 2 Subjects to Study for becoming a Wise Investor!

What do you think the answer is?I have asked this question to many, and I often get responses such as Finance, Investing, Stock Markets, Trading, Mutual Funds, Derivatives and so o ....Read More

In my post “Happyness -The Only Goal that Matters”, I had referred to two words ‘Mimetic Desire’ and had promised to write on this. Well, it’s time to cover this key topi ....Read More

Whose goal is it anyway…

“There are key moments in life when we ask ourselves questions,” Sebastien Bras says. Questions such as ‘What have we done in the past, where are we today and what do we want ....Read More

“I thought I came to the expert, who can protect my capital and my family.”Who do you think said this?Sorry, wrong question.Attempt another one.What kind of client do you think ....Read More