Are you wondering what this number written as a headline means?

I am sure you are.

I had written a post headlined “Decision and Outcome” on November 2nd. One of the key points of the post was that just because the outcome is favourable does not make a good decision. Bad decisions are bad decisions even if the outcome is good. Many investors however look at outcomes and decide to invest in something. Scamsters know this very well.

I am sure you have heard of the hit Netflix series “Squid Game”. As soon as the series came out, anonymous creators (scamsters) came out with a SQUID cryptocurrency. It was pitched as pay-to-earn currency for an upcoming online game based on Squid Game.

The anonymous scamsters had liquidated their holdings and disappeared. 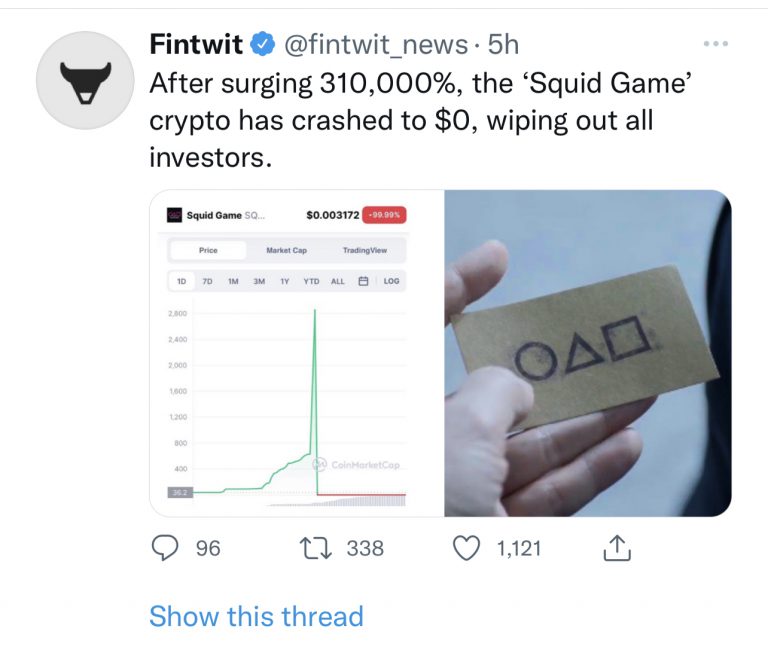 It was very difficult to scam people previously. You had to literally do it person by person. There was a lot of hard work involved – traveling, meeting people, bullshitting, meeting more people and even more bullshitting.

You can scam people globally without even moving out of your basement. The SQUID story perfectly proves this observation or hypothesis. This is what happens when you invest based on outcomes or when you confuse entertainment with investing.

Which camp are you in?

One of the fundamental requirements to be successful as an investor is to have a positive view of the future. I call it Optimism. There is a general sense even among smart people t ....Read More

The Dangerous Month for Stocks

"Can you guess the answer"?If you search this on google, you are likely to get September, August and June as the likely answers. Some might even say January or November.This Mark T ....Read More

I had meant to write this on April 5th ,2021 but somehow missed doing it.Why April 5th you may ask. What is so significant about this?It’s significant because an event that peopl ....Read More

We live in a world of To-Do’s. We all have a To-Do List and it is the biggest and the only list that we all have.However the first list to have, is your To BE List.These are ....Read More

Here are some valuable insights for the next few decades. I hope you find them useful to make sound financial decisions. You are likely to live longer. Your lifestyle inflati ....Read More

The Games We Play

Finding the perfect investment is everybody’s favourite game in investing.Can you guess the next two? These games ar ....Read More