I am so fascinated by this headline (and change as a subject) that for the first time in almost 2 years, I am publishing the same post in both of my blogs www.happyrichinvestor.com and www.happyrichadvisor.com

Take a look at the image below. It is a real newspaper cut-out from the early 1900’s. Pessimist Archives does a wonderful job of curating these. By the way Pessimism is a Real Business Model but that’s a topic for another day. Reread the contents of the image carefully. 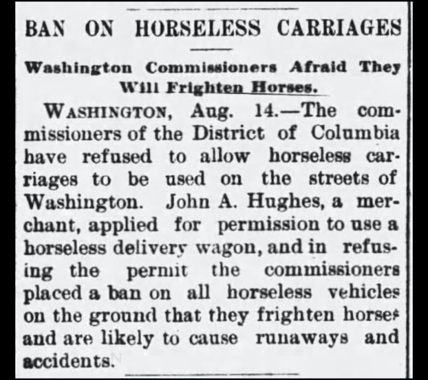 Can you believe this?

Washington Commissioners were afraid that Horseless Carriages (aka Cars) will Frighten Horses, thus a Ban on Them.

We might even laugh while reading the above, but the reality is that this is how society in general responds to new technology.

Don’t believe it yet?

Just 25-28 years back, the Internet was seen a fad and meant for gambling and pornography.

Additionally, a Nobel Prize Winner in Economics, Paul Krugman, wrote in 1998, “The growth of the Internet will be slow drastically, as the flaw in “Metcalfe’s law” -which states that the number of potential connections in a network is proportional to the square of the number of participants- become apparent: most people have nothing to say to each other! By 2005 or so, it will become clear that the Internet’s impact on the economy has been no greater than the fax machines.”

Well, you know the answer to the impact of the internet on our lives.

So how do we protect ourselves from falling into this trap of resisting change?

The Greek Stoic philosopher Epictetus has the answer. He said, ‘We should get into the habit of asking ourselves,’ “What illusion about myself do I entertain? Do I, too, ever make that boast about being prepared for whatever may happen? If I don’t know something, am I properly aware that I don’t know it?”

This is the Correct Order…

Most people invest this way:Portfolio comes First Plan - Depends on the Market or MediaGoals - What the hell is this? The wise ones follow this order: Goals - Why? ....Read More

Last week, I wrote “14 Words to understand Risk”. Just continuing that train of thought in this Nano. Safety is a myth. We feel safe when there is no volatility in an inv ....Read More

Who will you bet your financial life on?

The headline might be a little puzzling, but I am hoping that this Nano will make you think. Who will you bet your Financial Life on? Government Bonds to deliver you some safe r ....Read More

This is common between Investing and Losing Weight?

Have you ever tried losing weight? Many of us have at some point of time and we all should relate to this.The process is as follows:We Start Losing Weight – though hard but it is ....Read More

Risk as a subject is rarely understood by investors and the general public. Thus, we have shortcuts for risk based on our perception, and/or experience. Mostly, it’s perception a ....Read More

Most people miss out the difference between a Learner and a Learned.Who would you rather be? I made my choice a long time back. I prefer to be a life-long ....Read More