Missing the Best 20 days is one of the most favourite charts in the asset management space. I am sure you would have come across this at some point of time whether in a presentation, article or seminar. I have spoken about this too and had done a post “The 20 Best Days in the Last 20 Years” in July 2020. While there is a lot of literature on what happens to your returns if you miss the best 20 Days, I have not seen anything on what happens if you miss the worst 20 Days. So, I thought of doing a data driven post on this topic to see if there were any hidden nuggets of wisdom. And did I find any? You are about to find that out soon.

Alert: Fasten your seatbelts as you are about to see a lot of numbers. I understand this can be overwhelming, so I have tried to keep it as simple as possible.

Let’s take a look at 2 sheets. The first sheet has 2 tables. The first table gives you the details of the compounded annual returns of the last 20 years as well as the returns if you had missed the best 20 days (from 1st January 2002 – 31st December 2021). The second table gives you the best 20 days along with their dates and daily absolute returns. 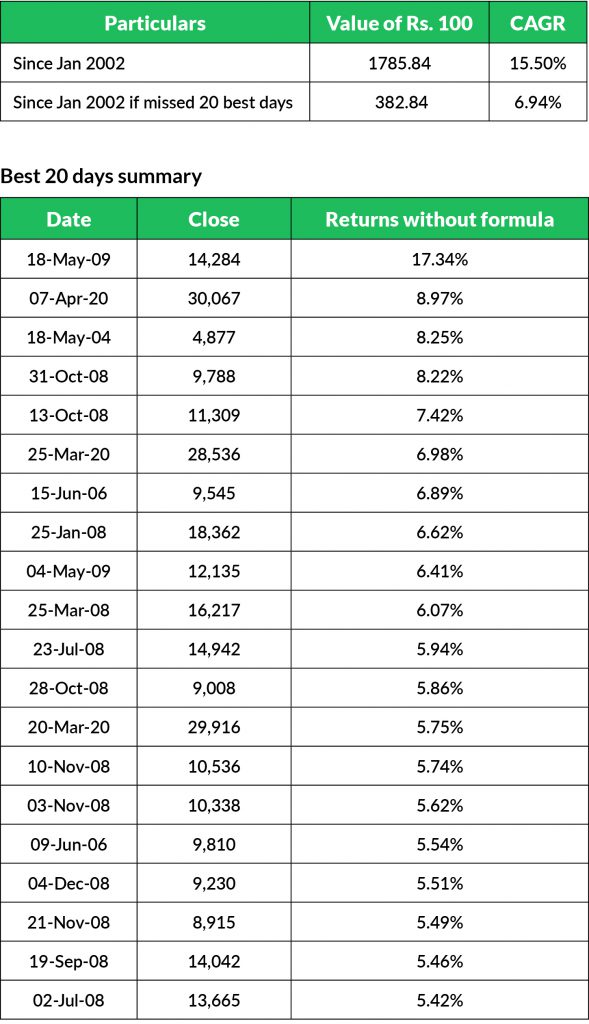 Digest the numbers for a bit before we move on to the second sheet.

Now this sheet has 3 tables.

The first table gives you the details of the compounded annual returns of the last 20 years as well as the returns if you had missed the worst 20 days (from 1st January 2002 – 31st December 2021). The second table gives you the worst 20 days along with their dates and daily absolute returns. There is a third table in this sheet that compares the number of best and worst days in their respective years. This is an interesting one so look at this one in particular carefully. 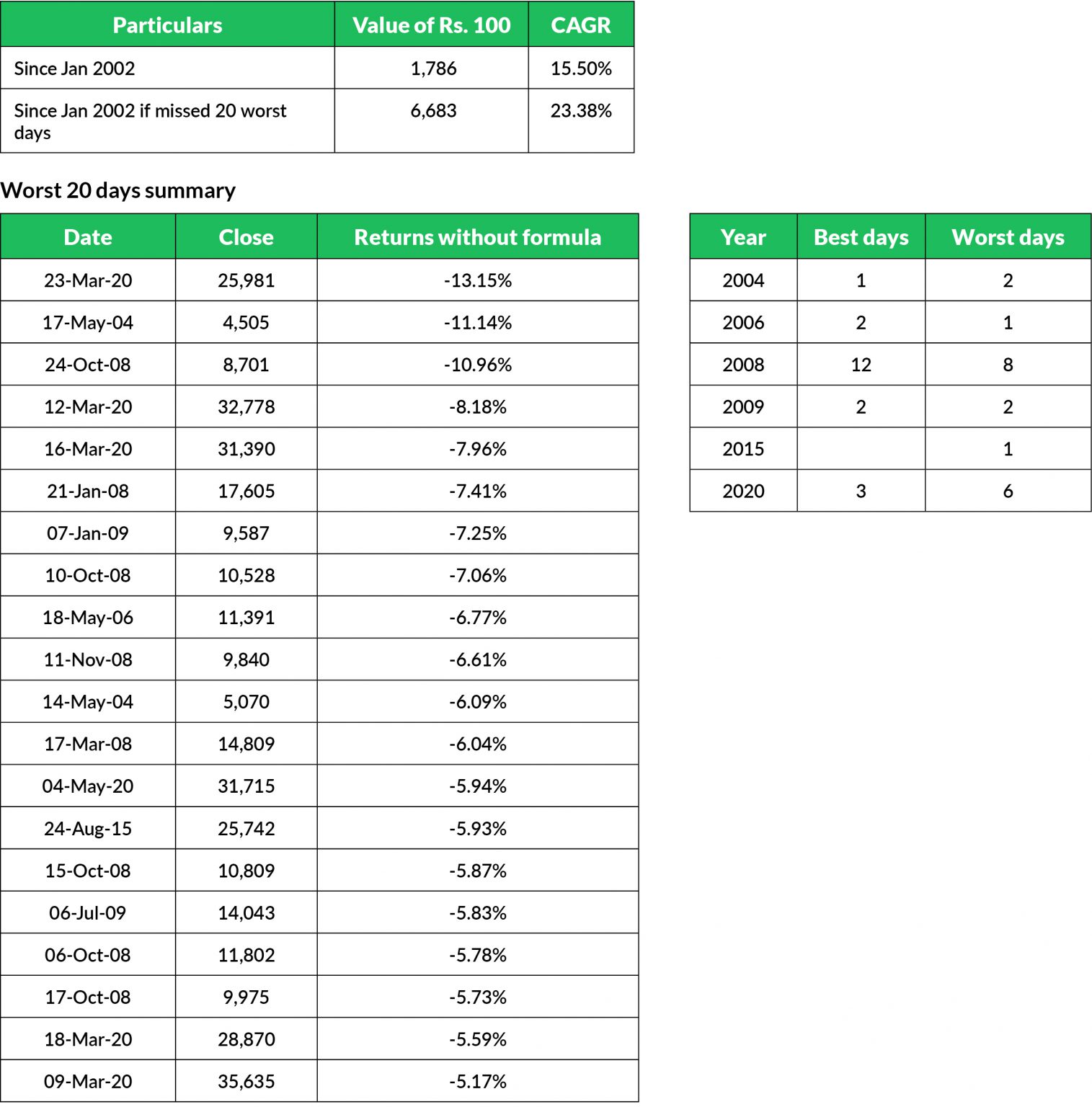 Avoiding the worst 20 days would have delivered an additional 7.88% p.a.

Did you know that?

I have not seen many people knowing this number while intuitively knowing that there is some gold in trying to avoid the worst days. Thus, we resort to market timing or look out for people who possess this skill. And this is exactly where we fall into the market timing trap.

The third table (as well as the second tables from both sheets) will help destroy the market timing argument.

As you can see carefully in the third table, the best days and the worst days are in close proximity to each other. The years 2008 and 2009 (anyone remember the global financial crisis caused by greedy crooks from reckless financial predators) have the maximum number of worst days as well as the best days.

Yes, this is very easy for all of us to believe.

But could you imagine that the best 14 days would also turn up in the same period?

I bet many of you didn’t.

Let’s zoom in a bit with yet another example from the above sheets.

Guess how many days with the best returns in those same 2 months?

You got it right this time. The Answer is 6.

If this is true (which it is), how on earth can you actually time the markets even if anyone had godly powers?

How would it be possible to get into the stock market on a certain day and then get out after a few days/weeks and then again get in?

Do you think it’s possible?

It’s absolutely not and anyone who tells you that he/she can do this is simply a bullshitter. Yes, you can rebalance a portfolio and sell high and buy low (by sticking to an asset allocation) but there is simply no way to accomplish the feat of market timing.

The truth is that there is simply too much noise during such turbulent times.

To avoid the worst days, people end up missing the best days too.

The Irrelevant Absolute and Relative

A few days ago, one of our partners received an email from her client Ashish. The email in question was a second opinion on his portfolio given by India’s biggest wealth manageme ....Read More

What better way to start the year than writing about Emotions and Worry? Don't you agree? Maybe Not. I get it if you don't. Trust me, I don't get it too, but this is ....Read More

The Gorillas of Investing

The headline might seem a little off but there is a context that you will appreciate.Before I get into the details, I would like you to watch this video. (Watch it first and then r ....Read More