The Difference between Signal and Noise that every investor must understand

One of my favorite blogs is Signal versus Noise (by the makers of Basecamp). They say that the blog is about “strong opinions and shared thoughts on design, business, and tech”. Though the blog has nothing to do with investing in general, the name itself “Signal Versus Noise” has a lot of relevance for all of us.

Can you think about some of the signals that we investors are exposed to?

Take a minute or two and try to come up with some answers.

I am pretty confident most investors would get it right but I am not sure how many actually follow the signals. Let’s first figure out the real signals that you are exposed to.

The pace and nature of progress (including lifestyle change) is one of the biggest signals. Just look at your own lifestyle , income and net-worth. It would be much better than what it was 10 years ago. Even in 2010 , it would have been much better than what it was in the year 2000. India took 60 years for reaching the $1 trillion in GDP , it took 7 years for the next $ 1 trillion and 5 years for the next $1 trillion. The point I am trying to make is that we will reach $4 trillion and then $5 trillion and then $10 trillion at some point of time. The focus is not on when it will reach but the pace of progress or rather the quantum of progress that is happening. Not convinced yet.

Think about this example.

I grew up in a middle class society (gated community for global audience) and lived there for almost 36 years. We had 120 Apartments , just 2 families had cars, few telephones and lots of place for children to play. Fast forward 2015, there were more than 120 cars, even children had a cell phone and practically limited place to play. I am sure anyone reading this will be able to relate the nature of progress that has happened… This is a key signal and thus I had to make sure you understood where I was heading.

Imagine the year 2030. Would India be in a much better place in terms of economic growth and prosperity than where we are? Would my personal lifestyle be maintained or would I be better off?

I used to tell people in 2005 that we might not have the best airport today but someday we will have a world class airport (and we do have a world class one now). I don’t know what the GDP size will be or where the Sensex will be but I can say with 100% confidence that they will be way up than where they are today.

The second biggest signal is the rise of the middle class and even people in the lower income brackets (talking about domestic help and drivers), and their aspirations. I get so happy to see when their children go to English schools, study well and a lot of them go on to become Engineers, Doctors, Athletes, Chartered Accountants and so on. These aspirations and the opportunities that are present will bring even more consumption in the economy thereby making India the Largest Middle Class Consumer Market by 2030 (at $8.8 trillion, well ahead of China and Europe – Source Prof. Mauro Guillen in his book “Global Turning Points”). I know China could have the highest GDP but the Indian Middle Class consumer market will be the largest globally (Each one of us is witnessing this everyday).

The table below from the book “Global Turning Points” highlights the above point. 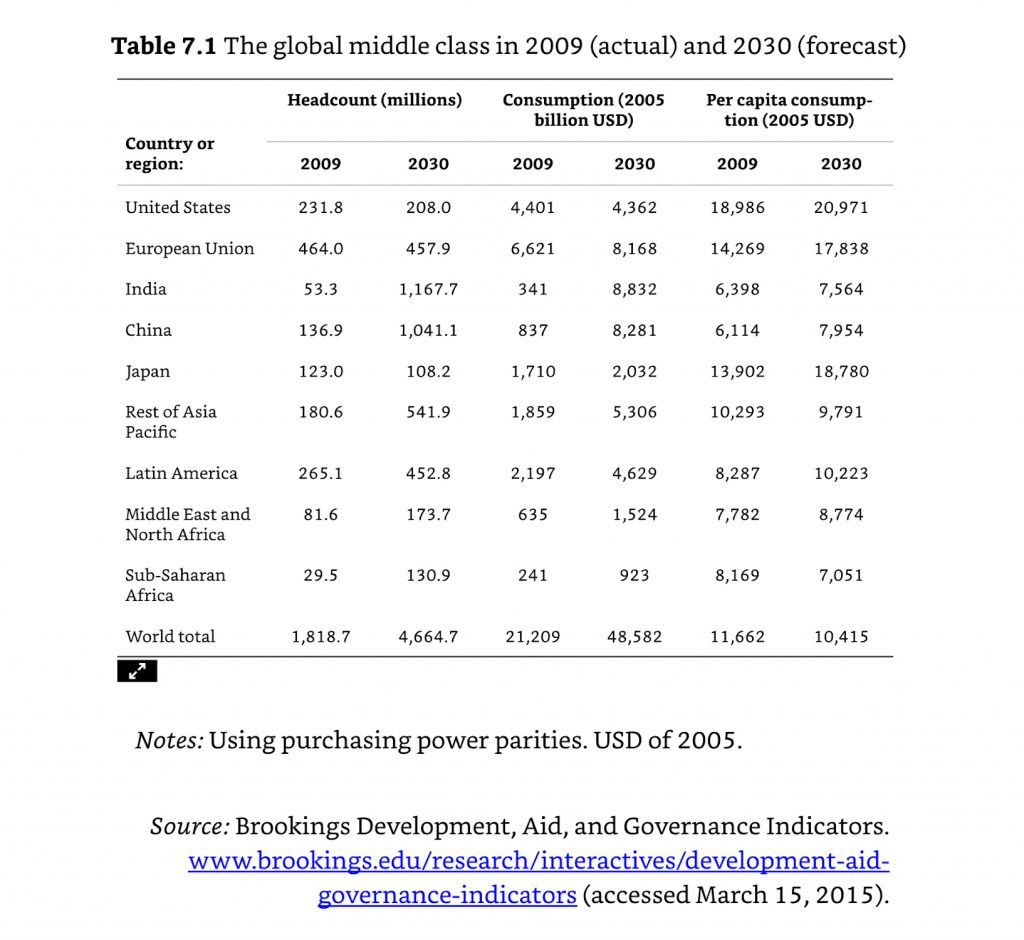 The third signal is the rise of the millennials and changes happening in consumer preferences because of all the experiences they are exposed to thanks to brands such as Apple, Starbucks,  and Amazon to name a few. Consumers are experiencing global products and services and are willing to pay a premium… Let me illustrate this with an example. Think about Starbucks Coffee and a local Udipi restaurant. Both serve coffee and in fact, the Udipi restaurant serves better coffee…Where do you pay more?

The fourth key signal is the size of domestic investments happening every year in the capital markets (I call it the size of the SIP (Systematic Investment Plan) Book). Today the SIP book of all the asset managers in the country put together is around Rs.8300 + Crore  per month. Yes that is a staggering Rs. 1 Lakh Crore ($ 14 billion dollars) just coming into the capital market by retail investors. This number will only go up and I won’t be surprised to see a  Rs.25000 Crore per month investment (Rs. 3 Lakh Crore or $ 40 billion dollars just from this piece assuming currency at current rates).

I am sure there are many other signals and my point is not just to list all signals. The point is that you must take some time and reflect on these signals.

Now what do Investors do? Obsess with Noise…

What is Noise ? I have listed a few

1. Markets Going Up and Down

2. Reading Headlines and getting worried about it.

4. Active versus Passive, and Benchmarks

The list is by no means exhaustive but I am sure you are getting the drift of what I am saying.

A business daily reported Rs. 3 Lakh Crore of wealth lost. Then 2 days later they said Rs.5 Lakh Crore lost. We suddenly start feeling as if we have lost our wealth. Those were such shallow & stupid lines  and is Classic Noise. The media wants you to obsess with the noise and wants you to be dumb. That’s how they are going to attract eyeballs and higher advertising revenue.

It is very easy to obsess and focus on noise but let me guarantee you one thing. This noise is absolutely injurious to every investor as it will only make you feel that you are doing something but that something will generally be stupid.

Stop this obsession with Noise and Focus on the Signals. This one thing will help you become a Wise Investor and live your Happiest Financial Life.

Debt is generally considered to be the boring cousin of Equity because the action is always in the Equity markets. However, the Debt market has not been far behind in the last 18 m ....Read More

You should start with Embrace the Bear posted on 13th March, 2020.As I had written in the “Embrace the Bear” (repeating this phrase again so you memorize it), the markets wil ....Read More

Lessons of the Gamestop saga!

Lessons of the Gamestop saga!

The 4 Letters of Economic Recovery… Take a Guess… It’s not A, B, C or D

The next key question (beyond their own safety and health) on everyone’s mind is when will the economic recovery happen(when will things get back to normal).In case you have not ....Read More

In last Friday’s Nano, I had mentioned about writing an interesting take on calculating your Investment Time Horizon. Based on the posts that I have written; I am sure you have c ....Read More