Think about this pattern for a minute.

At the top of the market we can’t buy fast enough.

About three years later at the bottom, we can’t sell fast enough.

And we repeat that over and over until we’re broke.

No wonder most people are unsatisfied with their investing experience. 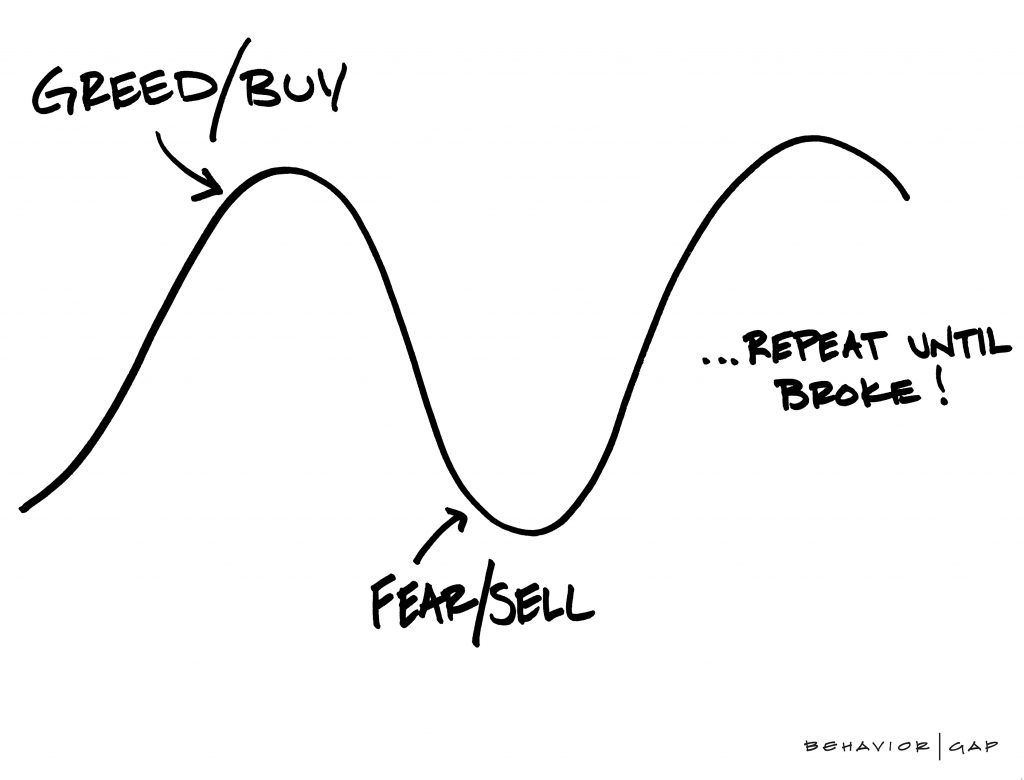 The problem is to recognize that, in aggregate, investors tend to be very bad at timing the market. The other problem is that though we recognize this as self-destructive behaviour, we will still fall prey to the proverbial ‘Siren Call.’

So, what is the solution?

Professor Shlomo Benartzi (UCLA; of the ‘Saving for tomorrow, tomorrow‘ TED video fame) has a very simple yet powerful antidote to remedy this age-old behavioural short-coming.

He calls upon investors to make an Ulyssesan Contract: a decision made in the present to bind oneself to a particular course of action in the future.

It derives from a strategy that Ulysses adopted on his journey home from the Trojan wars, which took him and his ship’s crew close to the Sirenusian islands. The islands were famous for being home to the Sirens, whose songs were so irresistibly seductive that seamen felt impelled to fling themselves into the waters, to reach the Sirens. No seaman ever survived, so no living human knew the nature of the Sirens’ songs.

Ulysses wanted to be the first human to hear the songs and survive. He instructed his crew to fill their ears with beeswax, to block out the sound, and then tie him securely to the mast and to ignore his pleas to be released, should he do so. The plan worked. Ulysses heard the Sirens’ songs, the crewmen ignored his entreaties to be untied and when they were out of earshot, he gave a pre-arranged signal to take out the ear plugs and release him. Ulysses had committed himself to a rational course of action at a neutral time, that is before he could hear the Sirens’ songs, and ensured that he stuck with his decision. This action of pre-commitment is the work of the reflective mind.

In the same way, financial advisors could invite their clients to engage their reflective mind to pre-commit to a rational investment strategy in advance of movements of the market that might otherwise trigger irrational responses of the intuitive mind.

Pre-commitment to a rational investment plan is important because the intuitive impulse to act otherwise is strong.

There are two-parties to such a contract. The investor (Ulysses) who is committed to not let emotions get the better of him, and a trusted advisor (the crew with beeswax).

Nothing beats Inaction but ACTION.

Take up this challenge. Go ahead. Draw a Ulysses Contract to yourself and try and stick to it the next time the markets are irrational. I am sure that having taken this step will help you to pre-commit to rational action before the weather gets rough.

"Ontological Confusion" is a new phrase I learned a few days ago while reading a paper that described some recent research about why so many otherwise level-headed and sane people ....Read More

Last Tuesday, I had written a post “There will always be reasons for not Investing”. Today, I thought of writing a very simple yet powerful concept that I believe is worth gold ....Read More

I generally do not write about specific funds but the insightful lesson and thoughts for investors in this particular fund surely makes for an interesting read. I hope you enjoy th ....Read More

Even Warren Buffett makes Mistakes, but he does one thing differently

A month ago, Warren Buffett sold his entire airline stake at a $ 3.5 billion loss. He said that the airline business will never be the same again. However, in the last 4 weeks airl ....Read More

We know of Warren Buffett and his partner Charlie Munger. The investing world worships them and there are countless books that are written about them. Did you know about 40 years a ....Read More