Sometimes I end my posts with interesting quotes but this time I thought of starting the post with 2 powerful quotes. They actually sum up all there is, you need to know about the value of forecasting in investing. These quotes are so important that you might even want to make them a part of your Bullshit Detection Kit (I will be doing a full-blown post on this important subject in January 2023).

“We have long felt that the only value of stock forecasters is to make fortune tellers look good. Even now, Charlie (Munger) and I continue to believe that short-term forecasts are poison and should be kept locked up in a safe place, away from children and also from grown-ups who behave like children in the market.” – Warren Buffett

“In all my 60 years in the stock market, I never found anyone whose opinion of what the stock market would do next week or next month was worth heeding.” – John Templeton

Read these 2 quotes again. You may even want to repeat them again and again till they are deeply etched in your belief system.

a. Because they are true.

b. And because you will need protection against the many bullshitters roaming around in the financial system. These quotes are likely to help you ignore the forecasts and more importantly the forecasters. They might even help you focus on what you can control and the things that matter.

It’s time now to look at an interesting visual. 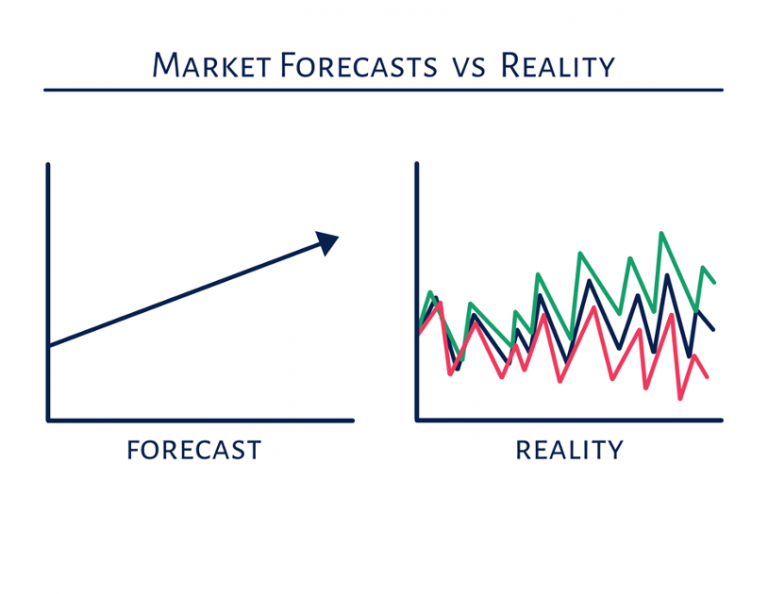 What does this visual tell you?

We don’t live in a linear world. We live in an uncertain world. Rather we live in a VUCA (Volatile, Uncertain, Complex, and Ambiguous) world.

In a world like this, no one really knows what’s going to happen in the economy or the stock markets. Forget the economy, we don’t even know what’s going to happen in our lives tomorrow. No one knows a thing. Not knowing about the future is fine because no one knows. But pretending to know and telling people that you know is nothing but cheating. The surprising part is people still believe these forecasters (rather bullshitters). All they have to do is change the forecast citing one reason or the other.

In fact, many firms (including global ones) have 3 forecasters. One is bullish, second is bearish and the third one is neutral. Someone is always going to be right. And the garbage that is thrown at investors by these forecasters is called research.

But the fact rather the unvarnished truth is that no one knows a thing about the future or tomorrow.

Don’t believe this yet. Let’s take a quick journey back to 2020.

No one predicted in 2020 that the entire world would suddenly be hit by a deadly virus. Even as we figured more details of the COVID-19, no one predicted that the entire world would go into a lockdown. No one saw the market correcting so quickly. More importantly no one again saw the stock market jumping back up and making new highs. No one predicted the rise and now the fall of many crypto assets. No one predicted the different waves of the virus, each bringing more pain and more deaths. After all of this stabilized and travel resumed, who had predicted that Russia would actually invade Ukraine. Almost every expert said that Mr. Putin will not pull the trigger. Even after Russia invaded Ukraine, every expert worth his/her salt came out saying that Russia will win the war in days or weeks at most. It’s now almost a year and the war is nowhere near its end. Over the last 2 years, experts of every stripe wrote or spoke eloquently how the dollar was about to lose its value. In fact, the US Dollar appreciated against almost all currencies including the Indian Rupee. The US Dollar continued to make new highs.

No one even spoke about inflation till late last year. No one spoke about interest rates going up at such a rapid pace in the US. No one saw a deep correction of 50-80% in some of the blockbuster tech stocks. Even venture capitalists who were funding stupid start-ups at ridiculous valuations did not see this winter. They didn’t know (rather had no clue) of the headwinds their portfolio companies might soon face. They raised bucket loads of capital in 2021 and deployed most of it before March 2022.

Anything left. I don’t think so.

Even if I have, it simply does not matter. The truth is the truth. No one knows anything.

While all of this is true, I also wish to highlight some other key truths that I had shared at the start of 2022 (and I will continue to share it every year- this will not change).

As we enter 2023, we should expect the following:

1. There will be some event in the world that will surprise us.

2. At some point of time, you might feel like selling or waiting for a correction to invest.

3. In short, you might feel like listening to the noise or even be injected with Expertitis (listening to bullshitters and financial pornographers).

As a wise investor however, you will embrace uncertainty and volatility. You will not abandon your investment strategy and run away. In case you have liquidity, you will invest without waiting for corrections. If you don’t have additional long-term capital, you will simply say “Oh, you are here. You came sooner than I thought you would”, and then let compounding do its job.

You will stay the course and let the forecasters and their forecasting Rest in Peace.

Which Quadrant do you want to be in?

Which Quadrant do you want to be in? Look at the Visual above with the 4 quadrants. The Visual is self-explanatory but nevertheless, let me ask you one mo ....Read More

How does a Real Advisor add value to you?

A lot of folks in the financial services space brag about their performance and how they can help you beat the markets or provide access to special products. Some will even go to t ....Read More

The Late John Bogle (Founder of the Giant Vanguard Group) said these pearls of wisdom “The Stock Market is a Giant Distraction to the Business of Investing”. I would add my 3 w ....Read More

The Late John Bogle (Founder of the Giant Vanguard Group) said these pearls of wisdom “The Stock Market is a Giant Distraction to the Business of Investing”. I would add my 3 w ....Read More

The Boy and the Rich Old Man

You must have heard this story before – There is this successful rich old guy taking a walk through a park and notices a boy lounging under a tree and doing nothing but counting ....Read More

In my post “Happyness -The Only Goal that Matters”, I had referred to two words ‘Mimetic Desire’ and had promised to write on this. Well, it’s time to cover this key topi ....Read More