Let me ask you 2 simple questions.

If you are a regular reader of the www.happyrichinvestor.com blog, you know my answer to these 2 questions in the context of humans.

What about machines though?

Do you think they can?

Chris Jones in his book “The Eye Test” gives a fascinating example on this issue.

He writes, “In 2019, Logic, a smallish, excellent magazine dedicated to technology, published an interview with an anonymous algorithmic trader. Following the economic collapse of 2008, the financiers responsible weren’t held remotely to account, but one of the so-called corrections was an increasing reliance on machines to do the trading for us. Part of the shift involved removing human decision making when it wasn’t perceived as adding any value, the anonymous trader said.”

“But I was intrigued by the trader’s use of the word perceived,” writes Chris. He further adds, “Data is meant to lessen our reliance on perception, to help us replace our beliefs with facts. But here was an algorithmic trader, talking about dramatic changes that happened because of how something seemed.

One algorithmic trading strategy involves trawling social media to divine sentiment about the markets or a particular product- using data to understand how people feel, because feelings still have influence. Lately, more funds have told the story that they have better quantitative methods than anyone else – better algorithms, better computers, better nerds, better access to better data. The number crunching has become the narrative.”

This thinking has clear flaws. Data mining largely depends on history repeating itself; we all know that isn’t true always (note the emphasis on the word always). While history does repeat itself (sometimes or many times), it does not repeat itself always.

Chris adds, “Unfortunately, quantitative models believe what they are told. As these techniques become more widespread, the anonymous trader said, the assumption that the world will behave in the future the way it has in the past is being hard-wired into the entire financial system.”

The algorithms had trouble understanding the puzzling buying behaviour of humans – whether it was stocks or toilet paper.

Look at this video of a brawl over toilet paper. 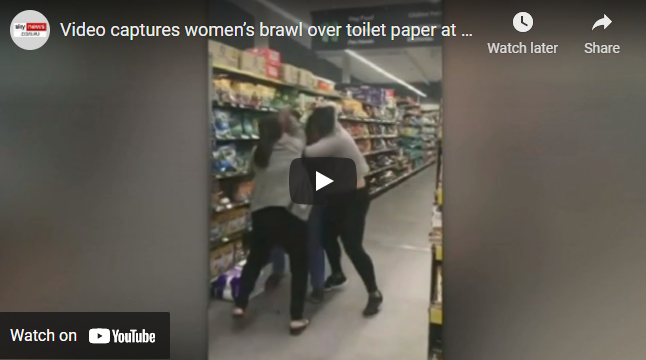 How can an algorithm factor such data points and make prudent decisions? Which algorithm could have predicted even the demand for toilet paper?

Chris adds further, “Like weather models, quantitative models and financial markets get confused when their inputs otherwise known as “us” and “our lives”- change too quickly or too radically. Putting too much of our collective faith in data can leave entire markets looking like empty grocery store shelves.”

This brings to the next flaw and problem with dependency on machines. While machines might not panic like humans, they tend to act in unison unemotionally. They tend to behave like birds of a feather flocking together. This is exactly what happened during the first wave. Every machine seemed to rush for the door.

The Gamestop debacle of 2021 clearly showed how a few retail traders on Redditt could blow up hedge funds (with the so-called sophisticated models), before blowing up millions of investors.

What do I mean by this?

Someone might be lucky once. Yes, the correct word is lucky. An illusion that someone has cracked the code, or someone can, is a classic mistake of many investors.

The verdict is unanimous: Woman/Man or Machine – No one can do this right twice consistently.

As Danish Theologian Soren Kierkegaard wrote: “Life can only be understood backwards, but it must be lived forwards.”

Risk Free Return is such a misused term in Finance and Investing. Just because it is labelled so, we literally believe that the Returns are Risk Free. However, when the word “Ri ....Read More

I am assuming here that after reading Part 1, you agree with me on the fact that a stock market is a complex adaptive system. If you don’t, I encourage you to read Part 1 till yo ....Read More

I know this sounds odd for the headline of an investing blog post. I promise though I have a point to make, so hang on.Adam Alter in his book “Irresistible: The Rise of Addictive ....Read More

Lessons from the last 40+ years of Investing

The Irrelevant Absolute and Relative

A few days ago, one of our partners received an email from her client Ashish. The email in question was a second opinion on his portfolio given by India’s biggest wealth manageme ....Read More

How much is Enough?

There is this insightful column by Morgan Housel “When Rich People do Stupid Things?” In the column, he writes about the Vanguard Founder John Bogle’s book “Enough” and t ....Read More