No living person signifies the power of compounding better than Mr. Buffett though there are many lesser known or even unknown people who have built their fortunes thanks to compounding. As we all know, Compounding never discriminates, and it works for everyone across genders, nationalities, races, and wealth levels. It does not matter to compounding who you are. It exactly works the same for all the 7.5+ billion people on this planet.

Let’s get back to the hero of this post.

Did you know that unlike Jeff Bezos, Bill Gates, Elon Musk and other well-known billionaires, Warren Buffett became a billionaire at the age of 55?

What did you think Warren Buffett did to get from $1 billion to $100 billion?

Well, this is what Buffett’s long-term friend and partner Charlie Munger has to say “Most investors do not copy our model because they think our model is too simple. Most people believe you cannot be an expert if it is too simple.” Mr. Munger further added “If you were an observer, you did see that Warren did most of it (building his track record and wealth) sitting on his ass and reading.”

Is this all that is required (seems so simple)?

Absolutely this is all that is required, but like I have always said “Simple does not mean Easy. Simple is never Easy. A lot of times, Simple seems so Simple that we think it’s ineffective or does not work. Hence most people do not do this. Instead, they look for some magic pills, hot investments and fortune tellers; Sadly, there are none and there will never be one.”

By the way, even point 6 is False as Mr. Buffett (Berkshire) has lost money on several individual investments. In fact, you might be surprised to know that Berkshire has lost money even in a Ponzi scheme named DC Solar. Many of his investments have not done well either. The point I am making here is that in investing, everyone will go wrong at some point of time and that is fine as long as you are diversified enough. Some investments might lose their value or not perform. Despite all of this, his wealth has grown thanks to the belief in the power of equities and the power of compounding.

There were a couple of things missed out in Charlie Munger’s lines above. I am sure he meant it but did not spell it out for all of us. I attempt to capture a couple of important points.

Finally, something that I rant quite often – Ignore the Noise, Fortune Tellers, Fake Experts and switch off the pessimistic fellows. Investing is an act of optimism about the future. Being optimistic does not mean assuming everything will be rosy but knowing that even if things go wrong, there will be light at the end of any dark tunnel and the world will continue to make progress (like we have witnessed through the biggest global event of our lives). Though the future is unknowable, we have to be optimistic enough to set goals, plan and invest in a diversified portfolio and then be wise enough to let compounding do its job just like Mr. Buffett does.

How many of us can do the simple but not easy thing that Mr. Buffett does?

Not many as many of us are likely to come between our investments and compounding. 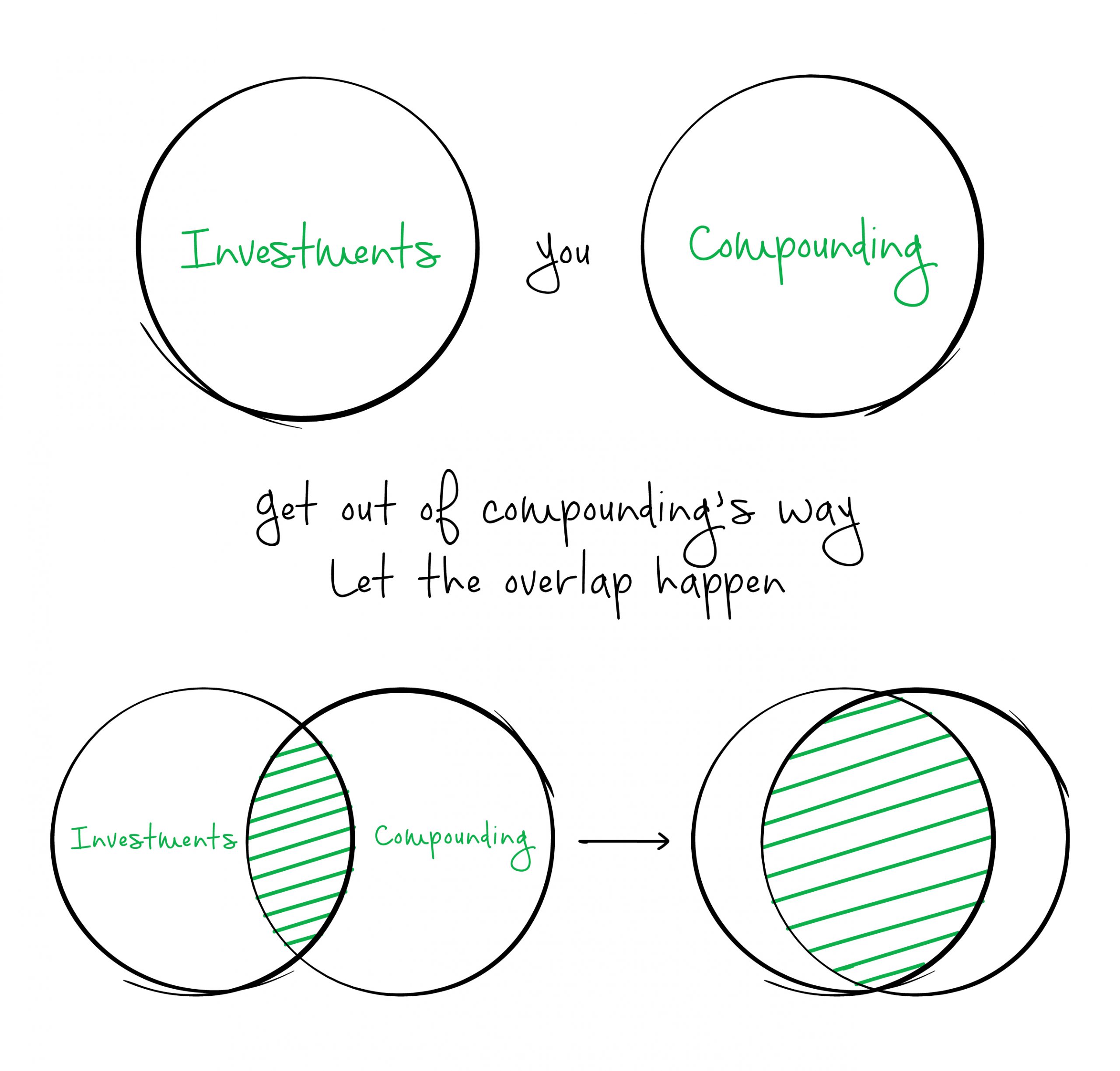 Are you up for the challenge of letting compounding do its job?

Do you think you or someone you know knows how to successfully interrupt compounding?

Let me ask you a question “What will you do if the stock market falls?” Think about it. What will be your response? Now I give you 3 options: a. Invest More b. S ....Read More

On Sunday, I met a gentleman called Aakash at a social gathering and he showed me a message his nephew (22 years old) had sent him. It read “Uncle, invest in X. It will go up 5 t ....Read More

Let me start this post with a statement that some or many might not agree with.Real Investing is Boring…Yes, it’s Super Boring.On the other hand, our environment is complex and ....Read More

Where is the market headed?

Imagine you are in the cockpit of a Jet with a trained pilot. You are heading to a certain destination.  Suddenly there are noises coming out from outside “Turbulence, Turbulenc ....Read More

You have a piece of information based on which you have formed your opinion on where the market is headed.Let us take the example of the recent US President Elections in November 2 ....Read More

I am sure you would have guessed who the legend of compounding is but before I get into writing about this, let me narrate a few lines from a brilliant book “Boombustology” by ....Read More