The Enoughness of Money

Is Money ever Enough? OR

Do you always feel that you need some more at least?

Some more right…We think we will have enough when we have that little more.

But have you ever stopped to ask yourself “How much is that little more or rather How much is Enough?”

It’s one of the most profound questions that you can answer about your financial life (the intersection of your money and your life). 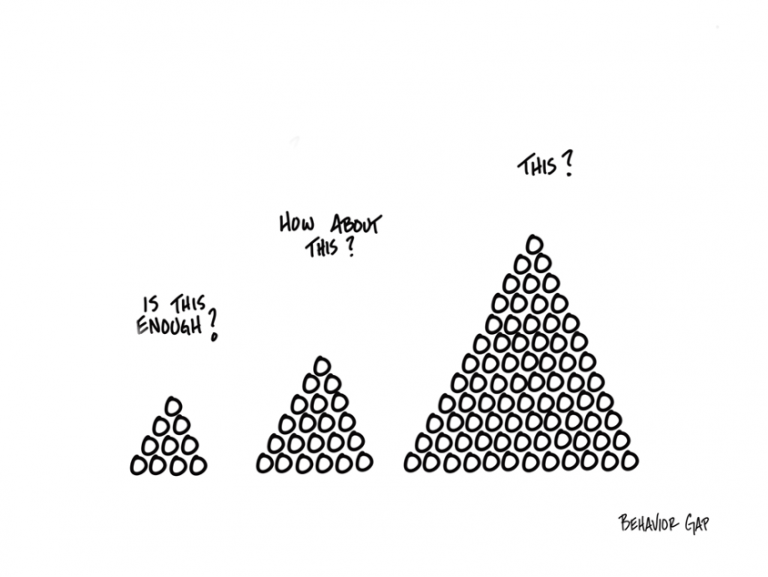 Knowing how much is enough is what I call the “Enoughness of Money”.

At least, I surely don’t when it comes to Pani Puri (Indian Street Food).

I’ve noticed that a very interesting thing happens when I keep eating it:

Puri 1: Best thing in the world, ever.

I learned this lesson for the first time, I overate Pani Puri.

And yet, for some reason, I still occasionally repeat the experiment though I have gotten wiser with age.

Of course, this phenomenon doesn’t only occur with Pani Puri. This is a well-documented economic principle called Marginal Utility, and, you guessed it, it applies to money, too.

Beyond a certain point, having more money will not lead to more security, freedom, and happiness.

Because security, freedom, and happiness do not come from more money (at least, not beyond a certain point). They come from knowing when to stop.

Guess what the billionaire’s response is.

To set the context, All the Money in the world is a real biographical crime thriller film based on John Pearson’s 1995 book Painfully Rich: The Outrageous Fortunes and Misfortunes of the Heirs of J. Paul Getty. The movie depicts the events surrounding the 1973 kidnapping of John Paul Getty III (his grandson) and the refusal of his grandfather, the billionaire tycoon, to co-operate with the kidnapper’s extortion demands.

Not only does this tycoon refuse to pay up initially, but then he negotiates the amount and finally even goes to the extent of looking out for tax breaks on the ransom amount. I found this movie very fascinating because beyond the plot, there was so much to learn about the Enoughness of Money (Vitamin E). This movie provides a context to reflect on your own dose of Vitamin E.

The point here is there is nothing wrong with owning more stuff or having more money (and wanting to be a billionaire – if that’s your thing). But thinking of more money as a measure of financial well-being and security is delusional.

Jack Raines in his Young Money Blog writes some wonderful thoughts about Australian professional tennis player Ash Barty in his post “Defining Enough”. He wrote, “In March 2019, a 23-year-old Aussie took the tennis world by storm when she defeated three top ten players, enroute to a Miami Open victory.

Two months later, she defeated Marketa Vondrousova in the French Open finals, dropping just 4 games in the final match. Barty became the first Aussie to win the tournament since 1973, and by the end of June she was the top-ranked player in the world.

After an 11-month tennis pause stemming from the Covid-19 pandemic, Barty returned to the courts, rattling off a series of wins in the Yarra Valley Classic, the Miami Open, the Stuttgart Open, and ultimately the Wimbledon in 2021 and she continued her dominance with an Australian Open victory in January 2022.

At just 25, Barty was the face of tennis. She had taken the torch from Serena Williams, spending 114 consecutive weeks ranked as the best player in the world in March 2022.

And then she retired.

You rarely see this in sports, athletes leaving the game at their peak.

Michael Jordan retired as the undisputed Greatest of All Times (GOAT) before playing 2 more forgettable seasons with the Wizards. Shaquille O’Neal, basketball’s most dominant centre ever, averaged 24 points per game over his career. In his 19th season, he struggled up and down the court averaging just 9 points per game across 37 appearances.

In a sports world that seduces its biggest stars with dreams of more titles, more points, more records, and more accolades, Ash Barty was the rare champion who walked away enough.

While Ash Barty’s are rare in sports, they are even rarer in the game of Enoughness of Money.

If you think you will stop when you make more…you won’t.

If you think you will stop when you make money fast…you won’t.

As we have seen countless times, wealth created through speculative means can never be secured rationally. Once a trader, always a trader. Once a speculator, always a speculator. Money is as addictive as any other addictive thing. Hence never let your money consume you or own you. Always know that you are in charge and have a clear purpose for what to do with your money.

At this point, I am reminded of some thoughts of one of my favourite authors Ruskin Bond. He wrote in his book (A Book of Simple Living) – “Money doesn’t make people happy. But neither does poverty. The secret, then, is to have as much as you need – or may be a little more and then share what you have.”

In short, the secret is about having enough but first knowing how much is enough. This is the simple recipe of the Enoughness of Money.

The Most Important Thing about Money

I had written a longer post but then chose to remove almost everything I had written (as the lines didn’t need any explanation). In fact, it’s the shortest Tuesday post I have ....Read More

Happyness - The Only Goal that Matters

“What’s the one thing that you would want for your children and family?”I have asked this question to thousands of families and also to myself over the last 17+ years.Invaria ....Read More

The Most Important Thing about Money

I had written a longer post but then chose to remove almost everything I had written (as the lines didn’t need any explanation). In fact, it’s the shortest Tuesday post I have ....Read More

Author Greg McKeown in his book “Essentialism” gives this brilliant example.Nathan Myhrvold, the former Chief Technology Officer of Microsoft has said (and then confirmed to me ....Read More