The First Important Decision every investor should take

The Financial Services Industry has taken great pains to make personal finance complex and make it seem that everyone needs a PhD to succeed in investing. We have made it our mission to simplify personal finance for you and to also remove the emotions of fear, greed , uncertainty or confusion that you might associate with investing. The goal is that you should feel confident and happy after having saved and invested.

I start with an anecdote from Benjamin Graham’s (also known as the father of value investing and Warren Buffet’s mentor) book “The Intelligent Investor”. “I once interviewed a group of retirees in Boca Raton, one of Florida’s wealthiest retirement communities. I asked these people mostly in their seventies – if they had beaten the market over their investing lifetimes. Some said yes, some said no; most weren’t sure. Then one man said, “Who cares? All I know is that my investments earned enough for me to end up in BOCA”. Could there be a more perfect answer? After all, the whole point of investing is not to earn more money than average, but to earn enough money to meet your own needs.

As Ben Graham says, “The best way to measure your financial success is not by whether you are beating the market but by whether you have put together a Financial Plan and a Behavioral Discipline that are likely to get you where you want to go”.

In the end, what matters isn’t crossing the finishing line before anybody else but just making sure you do cross it.

This is exactly where you should be focused “Making sure you cross your line”. The best part is that everyone and I mean everyone can cross the line with 3 simple decisions and actions.

Let’s focus on the first one today which is Time.

We all know that Time is Money…We just say it casually and we know of countless people who will waste time like they have this in plenty. In fact Time is the Most Precious Resource(as it is the only FINITE Capital) that every person has. Well there are different meanings of this but let me focus on how it applies to investing.. In the investing space, Time is not money but TIME CREATES MONEY. Yes you read it right. TIME CREATES MONEY. Take a minute or two and memorize this. If you get this , you will be richer (not just in terms of money, but in terms of career, health , purpose) than what you could ever be and we will consider our mission accomplished to a large extent.

So what do we really mean?

Time creates money means the power of compounding at work.. Compounding may seem very unimportant and not as appreciated as it should be… However the wise know the Power of Compounding.

Albert Einstein said “Compounding is the Eighth Wonder of the World”.

So why do we not take advantage of the Power of compounding?

Because first we don’t understand the true power of compounding. Second Compounding works slow at first and it takes time of around 10-15 years to form a solid foundation. However post year 20 it just shoots like a rocket and is unstoppable. Look at the graph below to understand this. 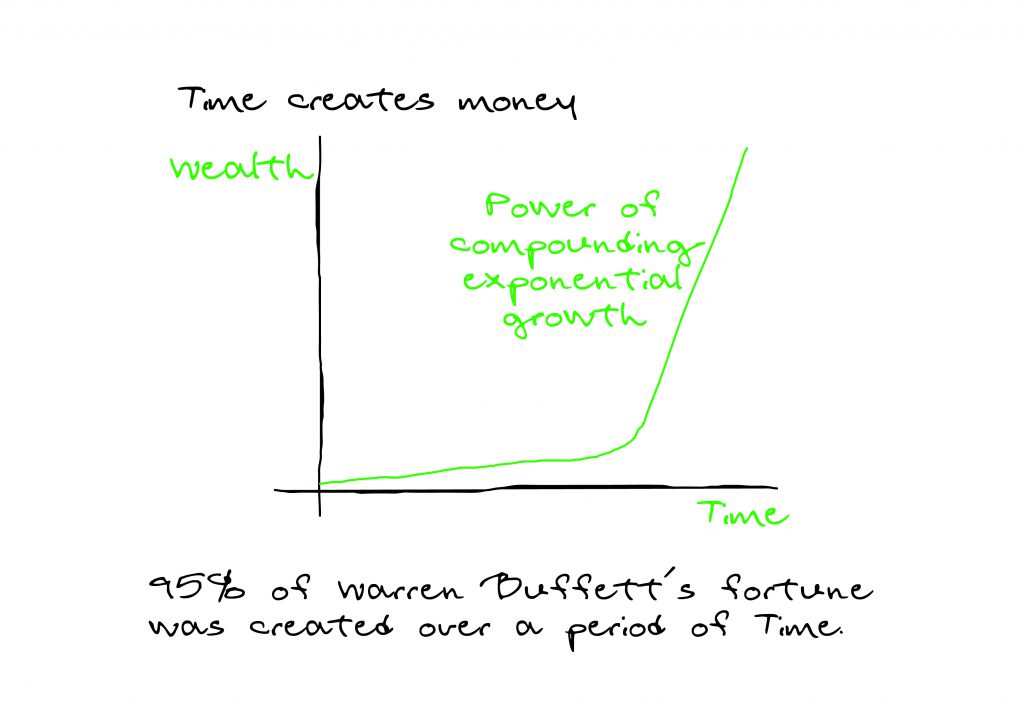 Let’s take a look at a real world example of Ajay and Atul .. Ajay started investing Rs.10000 per month at age 25 whereas Atul thought that he will start in sometime because it’s just time and he can catch up. He ended up starting at 26 year (1 year later) Rs. 10000 per month. Ajay and Atul had invested almost the same amount except that Atul had invested Rs. 10000*12 = 1.2 Lakh less than Ajay. However at age 60 the difference in their accumulated amount was a staggering Rs.1.15 Crore (99.99% of people aren’t able to imagine this). This is the power of time and compounding. Don’t let this happen to you.

So how can we take advantage of compounding and for Time to create Money for us ?

Make a decision to start invest NOW and like the Nike Slogan says “JUST DO IT”. You are burning or throwing away money and not letting TIME work for you. I am confident that the fact you reached here means that you are serious about making Wise choices about money. Aren’t you?

This is the first Simple Decision and Action.

I hope you loved this post. Feel free to share it with your colleagues, family and friends.

My objective here is to help you live your happiest life possible Let me know your thoughts and if there any topics that you would like me to cover.